How is your drug price determined? Game theory perspective to the pharmaceutical Industry 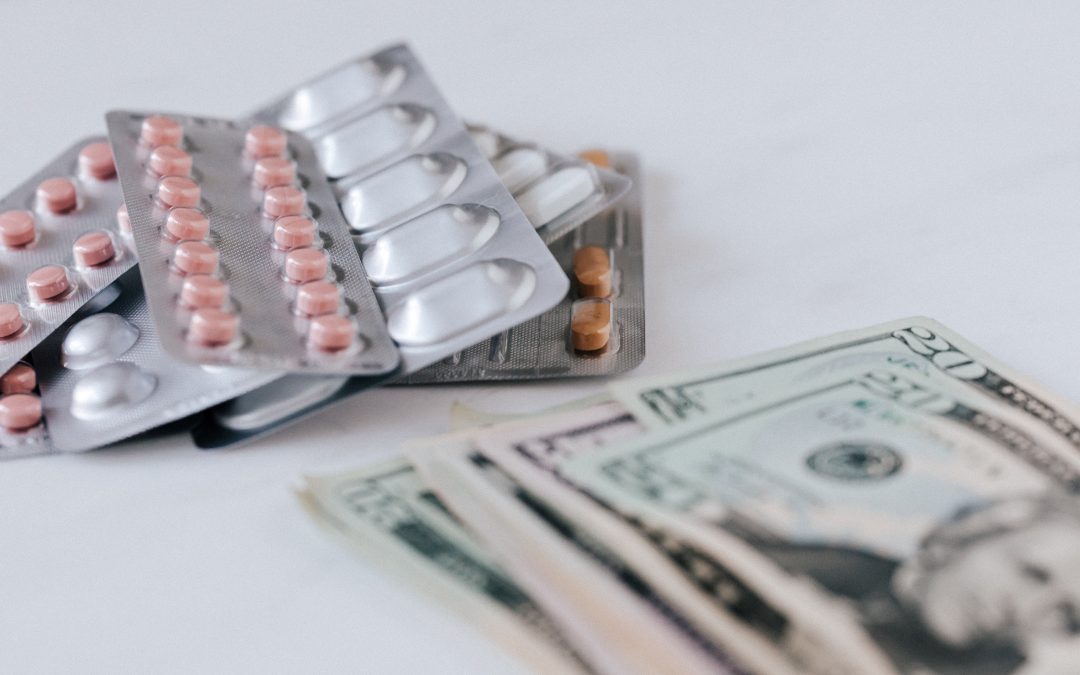 Who picks the price of a drug? Is it the market, the State, or the manufacturer? Medicines prices vary around the world and are the result of different processes and strategies. Depending upon the structure of the market, the price decision mechanism of drugs can fall under different types of games involving multiple players.

Often in countries with publicly funded healthcare and organized HTA practices manufacturers play a critical role in helping governments with supply of drugs and health technologies to which healthcare budget is allocated. Optimal use of the healthcare budget also includes finding the most cost effective supplier for drugs. And this is made possible by constructing a closed market with only one buyer and multiple suppliers who compete for the tender.

In this scenario, in theory, if the market is homogeneous i.e. all suppliers have the same marginal cost and exactly same effective product to sell, the only deciding factor remains is price. The payoff strategy is such that the player with the lowest price wins the game. But how does a player decide what is lowest given multiple other players are bidding for the same tender?

To further simplify, let us consider there are two homogeneous players – Alpha pharmaceuticals and Beta pharmaceuticals. The market consists of only 1 buyer! Once this buyer is taken by a seller there is no one left to sell which would lead to zero profits for another seller.

Technically, for Alpha for any bid it picks above marginal cost (cost of producing incremental unit) there exists a bid that Beta can pick which is lower than Alpha’s bid and higher than the marginal cost and the same is true vice-versa. The only equilibrium price left for both the players in this game is the marginal cost itself, which pushes the market towards a competitive equilibrium (An ideal state in an economy where consumers get the maximum benefit because of perfect competition in prices) and gives maximum advantage to the buyer. This scenario is also called a Bertrand price equilibrium. 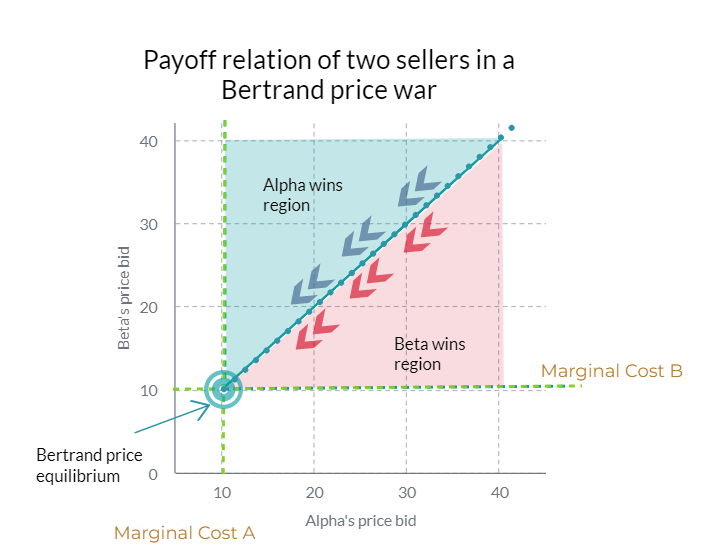 But do we really see such a game in real scenarios? The answer is , Yes, to some extent. Even if the markets are heterogeneous, studies have shown that the key deciding factor for the buyer is often the price of the product and the market is more inclined towards a Bertand equilibrium than other game theory equilibrium1

Indeed, during covid times right tendering strategies enabled governments of the world to procure Covid vaccines from manufacturers as a fair deal2

However, there are some serious drawbacks as well to this type of game where the sellers initially tend to over commit to get the tender and later may compromise over the quality of the product.

Have you ever wondered why some government websites are not user friendly and often poorly crafted?

I hope you got the answer why. But such quality compromise can be sinister when it comes to the healthcare industry, and this is where the role of Health Technology Assessment agencies (HTAs), where comparison of both the costs and effectiveness play vital roles, becomes supercritical with such types of pricing games involved.

Here, unlike a tendering game the game is spread over infinite intervals of time, i.e. the sellers can decide price over a period of time.  But if there is only one seller in the market the decision is quite simple.

Yes, a monopoly is a possible scenario in the pharmaceutical industry as the backbone of this industry is research and it is very likely that a company can come up with a patented technology or drug which only they can make and sell exclusively for some years. In fact, according to the World Intellectual Property Indicators(WIPI) report 2021, the Pharmaceutical industry contributed to 3% of all technology patents filed in 2019.3

In a game where there are two or more different patented technologies by different pharmaceutical companies to cure the same disease (consider the case for Covid vaccines), the resulting structure would be similar to Cournot Oligopoly game where a seller settles at a price which maximizes its profits given other sellers also do the same.

And not always because of patents, an Oligopoly in pharma is possible just because of trust and goodwill certain pharma companies create over a long period of time.

But there is surely a huge market which generic pharmaceutical companies capture once a certain drug is off patent bringing into picture another variant of Cournot Oligopoly game which is called the Stackelberg game.

Theoretically, more firms should enter into the market eventually bringing down the price of the drug. This indeed does not happen as the buyers with high willingness to pay go for the same drugs at a higher price from sellers who they perceive as more trustworthy. But in reality if the HTA agencies in the country are in place there can be comparative analysis in terms of costs ,effectiveness and safety between the drugs of premium pharma and generic pharma companies. The below diagram explains different pricing games that may take place. 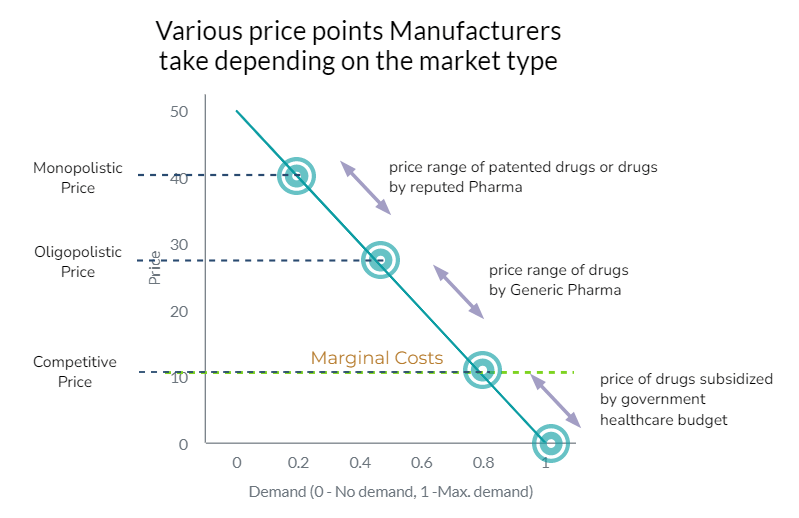 To summarise, the decisions related to pricing and procurement are always some sort of a game. And often the outcome of the game is highly influenced by the construct of the game. Opposite to Game theory the science of constructing games is called Mechanism Design Theory, which is not limited to designing Auctions. Indeed, when regulatory authorities and governments often play with entry/exit barriers (like Quality standards, minimum capacity, additional taxes etc)  in an industry to regulate prices in a market, it is also a sort of mechanism design. However, to evaluate these designs mathematically and know the final outcomes (or probable decisions of players) is often challenging and hence makes Game theory and mechanism design a more interesting field of study. Especially in industries like pharmaceuticals where mathematical modelling has found its respected space in areas like HEOR and Analytics, game theory is yet to be explored, despite  its potential applications.