Cost of war on Global Health: A short commentary 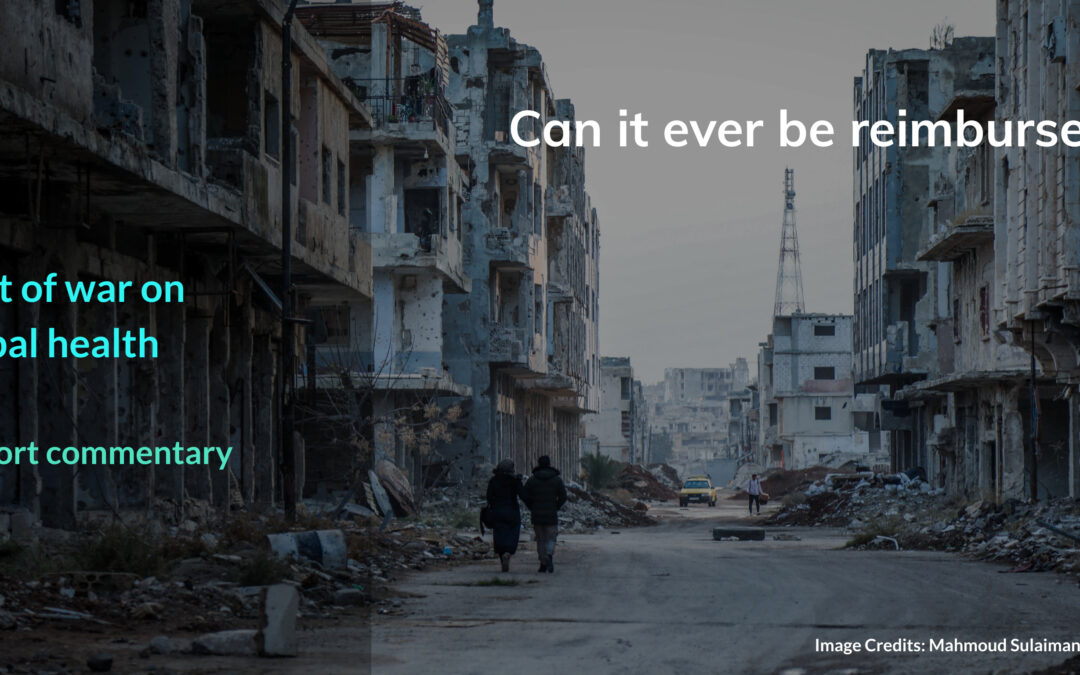 Although conflicts have existed since the beginning of human civilization, 21st century saw a surge in mass violence, wars, genocide and continued conflict. In 2008 alone, 345 conflicts were ongoing worldwide, of which 134 (39%) involved large-scale violence resulting in millions of deaths.[1]

According to the World Health Organization (WHO), war is the 19th cause of loss of disability adjusted life years, if we only take into account indirect impacts of war.

In January 2018, Turkish Medical Association, in response to the Turkish Government’s announcement of a military operation in Syria, called war a “man made public health problem”.[2] Although attaching a numerical cost to life is not this blog’s intention, rather we will try to identify the multitude of channels through which conflict and devastation affects healthcare and try to understand the short and long run costs of war on healthcare of war affected countries.

Health costs of war can broadly be divided into direct and indirect costs:

The most direct consequence of war is loss of human lives. Wars affect the mental and physical health of veterans, civilians and refugees. They throw people in unsanitary conditions, preventing access to clean water, food and nutrition and increasing the risk of infectious diseases. Women are also subjected to sexual crimes during wars which leave behind deep physical and psychological scars.

It would be a misjudgment to restrict health costs of war to the immediate death and devastation. This large-scale devastation leads to a complete breakdown of health infrastructure resulting in a public health disaster. They result in a diversion of scarce resources in the short run, reducing capacity of healthcare systems at a time when they are overburdened and needed the most.
In fact, devastating wars have been found to have a strong causal relationship with maternal deaths due to lack of access to obstetric care. Maternal deaths data between 1980 and 2008 reveal that six countries ( Pakistan, India, Nigeria, Afghanistan, Ethiopia, Democratic Republic of Congo) which were involved in armed conflict at the time of death accounted for half of maternal deaths around the world.[3]

Wars have a more lasting impact on a country through the erosion of human capital. Periods of emergency service compel young people to join the armed forces which reduces their years of education. As a consequence of this, there are fewer people in research. Although this impact cannot be felt in the short run, in the long run, continued wars harm the academic atmosphere in a country and lead to erosion of human capital.

Second generation growth models highlight how loss of human capital can consequently affect economic growth of countries, leading to further reduction in health outcomes – resulting in countries stuck in a loop with a shrinking pie. For lesser developed countries which start off with an already smaller pie and poorer attainment of education and health, a divestment from health and education can be disastrous and may throw such countries in an inescapable poverty trap. In fact, the lingering effect of war can be felt decades after the war ends.

Now, let us look at some countries which historically suffered the carnage of war. We will see how these countries suffered both direct and indirect costs of war, and hopefully learn some lessons from history.

Just as the Ukraine-Russia war enters its ninth week, it is imperative that we reflect on the devastating impact war has had, and continues to have, on other nations and hopefully we shall realize how human greed for power ultimately leaves all participating nations impoverished and worse off than before.

Yemen, a low income country which was food and water insecure even before the 2000s, has been caught up in continuous wars for the last decade, perhaps witnessing the ugliest consequences of war. The United Nations has estimated around 400,000 deaths due to hunger and disease by the end of 2021- 70% of which are children. Four million people have been displaced, 14.5 million do not have enough food and 20 million out of its 30 million population require humanitarian aid. Lack of access to clean water and sanitary conditions has led to a devastating cholera outbreak.
Despite the low healthy life expectancy, there has been a steady divestment of resources for war. As a result, 7.8 million children have no access to education and very poor access to water and sanitation. The country maintains a consistently low healthcare and high military expenditure as compared to the world average[4]. In 2021, an attack on Marib, the government’s last stronghold in the north and the centre of an oil-rich province, broke out.
The UN has warned that over 100,000 people have been displaced because of the fighting there, and that two million civilians are at risk. Recently, the air war between the Houthis and the Saudi coalition has become more brutal.[5]

The Vietnam War remains one of the darkest periods in US history. The war was marked by a large number of war crimes including massacre of civilians, bombings, rape and torture of war criminals resulting in over a million deaths. The after effects of exposure to the chemical weapon Agent Orange is still being felt today.[6] At the end of the war, Vietnam faced an inflation of 900%.[7] The US military recorded around 58,000 American casualties. The war led to widespread protests against compulsory military participation, loss of life and carnage among American citizens. Infact, the war had a heavy impact on the US veterans. An eye-opening study by Angrist empirically captures the indirect repercussions of war on labour outcomes of ex-veterans.[8] The study reveals a persistent wage differential between ex-veterans and others for years after the war.

Coming to the case of Syria- it paints a particularly alarming picture of what internal displacement as a result of war may lead to. The war has resulted in around 207,000 civilian deaths, 10% of which are children. We see a sudden spike in mortality rate of infants in 2011, the year of the commencement of the Syrian War. The alarming amount of internal displacement (fig. 1) and immigration since 2011, the beginning of the war, has led to several issues like ineffectiveness of targeted healthcare policies, advent of new diseases and congestion of healthcare systems. Refugees displaced by war in Syria are found to be at an elevated risk of contracting infectious diseases like tuberculosis, hepatitis, rabies, etc.[3] 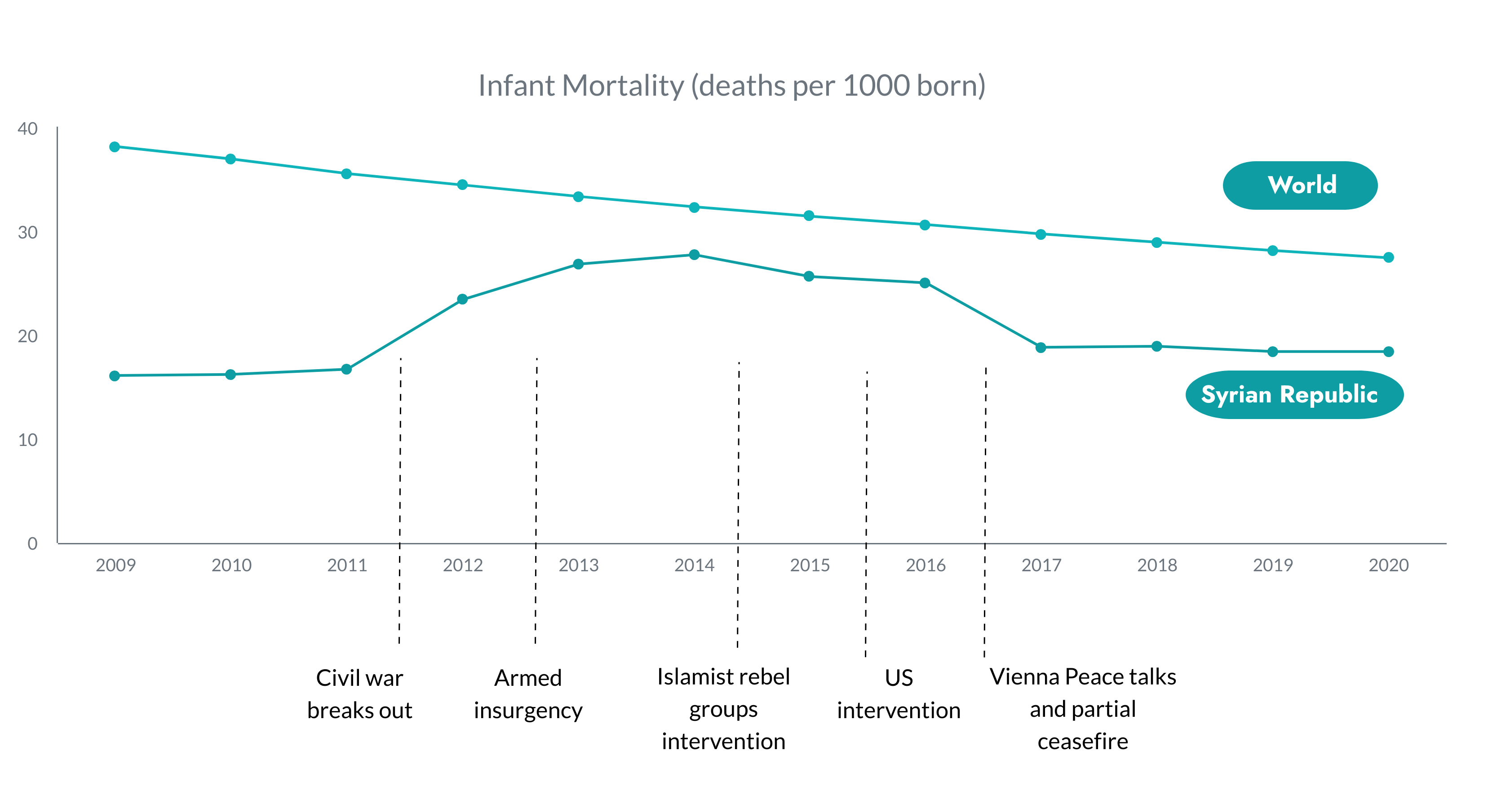 There are innumerable such instances of devastation, hunger and poverty as repercussions of war from over the world, throughout history. There can be no real winner in a war – wars mean loss of family and friends; as also poor economic growth and human development for all parties involved. However, there are wars ongoing even today in Syria, Yemen and other parts of the world, with no international consensus towards ceasefire and peace.

As we write this article, devastating wars are going on between Russia-Ukraine resulting in thousands of casualties, destruction and large-scale migration. International sanctions on Russia might lead to inflation, especially in oil prices. Both Russia and Ukraine are net wheat exporters. A breakdown in the global supply chain can lead to an increase in food prices and food insecurity. A simulation by NIESR reveals a fall in world GDP by 0.5% in 2022 and 1% by 2023 as a result of the Russia-Ukraine conflict.[9]

To what extent can we quantitatively measure the health costs of war?

Rigorously obtained scientific evidence has a huge impact in making a case and creating pressure against wars. Let us first look at some of the methodologies undertaken in previous literature. Retrospective cross-sectional surveys [9], and information surveillance systems [10] have shed light on the impact of mass violence and human rights abuses on health. Health outcomes like mortality, injuries due to violence, disability, morbidity, and mental health outcomes are commonly used health consequence indicators.

Tools such as the Dirty War Index (DWI) that link “undesirable or prohibited” war related health outcomes like civilian dealth, torture with international humanitarian law try to quantify the effects of war.[12]

In fact, one can use Health Adjusted Life Expectancy (HALE) that takes into account both longevity as well as quality of life. It should be noted that the impact of war is manyfold and often outside the purview of simple computation. Any measure to calculate the health costs of war should take into account both mental and physical health impacts. Measures like HALE do not take into account the deep impacts of war on mental health. No single measure can adequately take into account both the immediate and the long term costs of war. Additional costs of war also include destruction of health infrastructure and research infrastructure, brain drain due to migration, hindrance in trade of health technologies due to sanctions – to note a few. If a causal relation between all these factors and any measure of health outcome, say HALE, can be empirically established, it can be argued that such a measure is an acceptable measure of the health cost of war.

Amidst all the conflict and destruction around the world, we are reminded of the words of Albert Einstein who said, “I know not with what weapons World War III will be fought, but World War IV will be fought with sticks and stones.”  It takes years to build and seconds to destroy, and probably decades to rebuild. Through this article we tried to explore the devastating impact wars can have on human health and the many channels through which they directly or indirectly leave an adverse impact on health. We hope that we managed to convince our readers to unequivocally condemn wars, wherever they are happening and whoever is orchestrating such mass scale destruction. Militarism destroys years of toil of public health professionals and researchers and crumbles the healthcare infrastructure of countries.

In fact, in 2011, in a resolution passed by the World Federation of Public Health Associations it was recommended that public health professionals become active advocates for  the ratification of treaties and protocols related to war, legislation related to the arms trade and the development of initiatives that address the structural causes of war. Anti war public advocacy and activism is the need of the hour and as scholars whose work revolve around improving healthcare around the world, we cannot turn a blind eye to the current state of affairs.