Antimicrobial Resistance: A threat to the world! But, how does the UK’s ‘Netflix-style’ payment model appeal to roll out new antimicrobials and combat AMR? 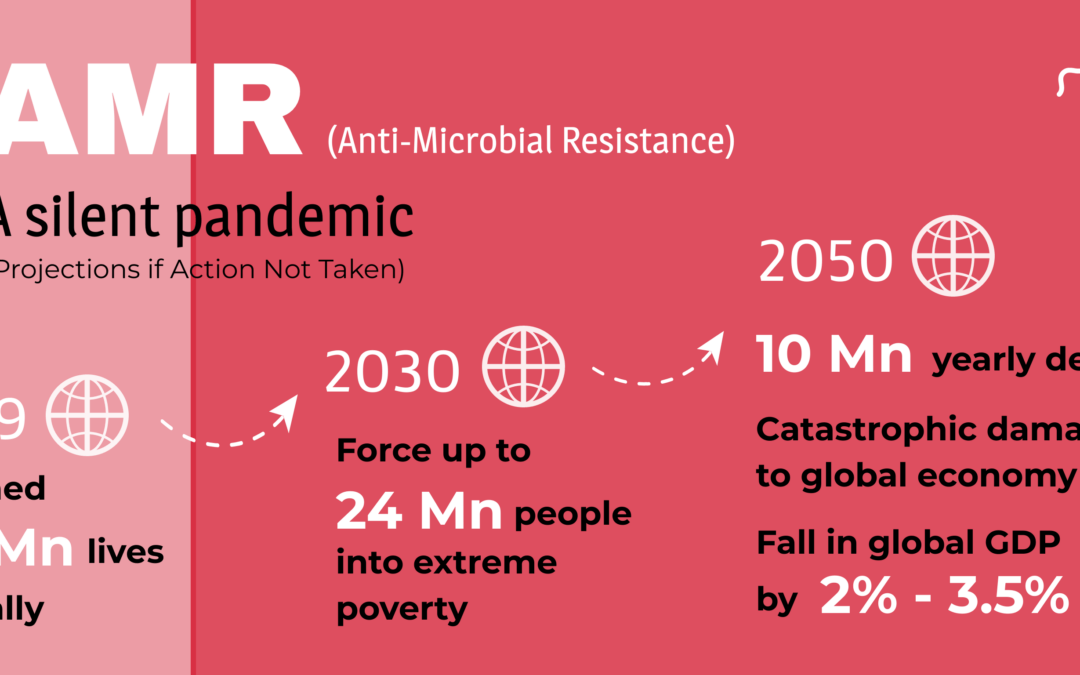 This blog covers the latest developments in the Antimicrobial Resistance (AMR) space and how the UK’s recently approved ‘Netflix-style’ subscription-based payment model can work as an example to the world to reverse the decline in the antibiotics category.

Before we dig into the AMR payment model, let’s understand what AMR is in layman terms. We have all heard of antibiotics, which combat bacteria. Also, there are antivirals, antifungals, and antiparasitics, which target viruses, fungus, and parasites, respectively. Unfortunately, the more antimicrobial medications used, the less effective they become against their target species, which is known as antimicrobial resistance – AMR. This suggests that microorganisms have acquired resistance to routinely used antimicrobial drugs. Inappropriate or excessive use of antimicrobials allows the target bacteria to develop AMR. Examples of inappropriate use include taking antibiotics for colds, sore throats, coughs and so on that are viral in origin, so they cannot be treated by antibiotics. Due to AMR, existing antimicrobials become ineffective and hence, for example, cancer treatments and common surgeries like total hip replacement would become very high-risk procedures and for many people, could lead to infections that cannot be treated and may become fatal.

A global review of AMR and its future impact estimated that there would be 10 million global AMR deaths annually from the year 2050 if we do nothing to preserve our current effective antibiotics or do not develop new ones. [1] The GRAM report indicates that over 1.2 million people died in 2019 worldwide from infections caused by AMR. [2] Thus, establishing AMR as unequivocally a leading cause of death globally. The report also highlights that young children, particularly those under-fives, and those living in low-and middle-income countries as being particularly at risk.

AMR is currently killing more people annually than HIV/AIDS, Breast Cancer and Malaria, yet does not receive the coverage or funding implemented to tackle any of these diseases. AMR must be prioritized and necessitates an approach and investment to protect the future of our medications and prevent the unnecessary loss of millions of lives.

What are the challenges with developing new antimicrobials?

Conducting R&D and then bringing new antimicrobials to market is a formidable challenge. Over 90 years ago, the discovery of the first antibiotic, penicillin revolutionized modern medicine. Antibiotics have now become one of the most common classes of drugs – used to prevent and treat infections and allow for possible complex surgeries that have become routine.

However, antibiotics are not as effective as they once were. Certain bacteria, known as “superbugs” have developed and learned to defy the effects of medications targeted to kill them over time. This process has been accelerated by our collective abuse of antibiotics in humans, animals, and plants.

Since the 1980s, no new antibiotic classes have been discovered. Antibiotics that have been introduced to the market in the last three decades are variants on previously discovered medicines. Discovering and creating really novel antibiotics is difficult: the science is complex, and the R&D process is time-consuming, costly, and frequently fails. A new antibiotic can take 10-15 years and more than $1 billion to develop.

What is the current financial model for Antimicrobials?

The current financial model for developing new antibiotics is unsustainable. When compared to more expensive therapies, antibiotics are quite inexpensive. Companies invest a lot of money to introduce a new medicine to the market, yet they can’t recoup their expenditures or earn a profit. Companies are always puzzled by the prospect of discovering something new, but they do not want it to be utilized too frequently in order to avoid resistance. New antibiotics are regarded as “medicines of last resort” against dangerous bacteria that cannot be treated with existing antibiotics. To minimize the spread of AMR, they must be used judiciously — and not in excessive quantities.

Companies’ profits are constrained by a combination of low sales and low prices. Many large pharmaceutical companies have begun to exit the field due to a lack of financial incentives. There were 18 global companies dedicated to antibiotic research in the 1980s; today, there are just a few.

There are currently insufficient medicines under development to address the rising threat of AMR. As per the World Health Organization (WHO), between 40 and 50 antibiotics are now under clinical development. Many of them will provide only marginal benefits as compared to existing therapies. Only a handful target Gram-negative bacteria, the most harmful resistant bacteria that may cause serious illnesses such as pneumonia, bloodstream infections, or meningitis. Over 250 antimicrobial medicines are under early-stage development in the preclinical pipeline, which includes more novel and diverse candidates. However, the first of these drugs might take up to ten years to reach the market.

What is the UK latest ‘Netflix style subscription-based’ payment model and how it appeals to bring more new antibiotics to market?

Amid growing concern over AMR, the UK has taken a significant step towards becoming the first country to introduce an experimental payment scheme for antibiotics, ushering in a new age of drug development and reimbursement.
The UK government conducted a long-awaited cost-effectiveness study of two new antibiotics earlier this year (2022) as part of a pilot program that would pay for the drugs using a so-called ‘Netflix-style subscription’ model.

Rather than payments based on volume consumed, the concept is to pay the companies upfront fees based on the expected value of benefits to patients and the NHS. In other words, regardless of how many doses are used, the health service pays drug companies a fixed yearly fee.

After a thorough procurement exercise,  the UK government selected the two antimicrobials for evaluation under its five-year national action plan for AMR [3] :

These value forecasts were used to inform commercial negotiations with manufacturers, leading to payments to the company in installments.

Under the model, the NHS in England will pay a fixed annual fee for access to the two medicines of £10 million per year, calculated based on the value they offer the health service, regardless of how much is used to treat patients. These discussions will seek to finalize a 3-year contract, with an option to extend the contract up to 10 years, during which the company will receive an annual payment based on the value of antibiotics to the NHS in England. The payment will not be linked to the volume of antibiotics supplied. The proposed contracts will last for ten years, are still in the draft stages, and are expected to be finalized in the coming times.

To combat AMR’s global health threat, there is a need for a global collaboration of the healthcare community, private sector and public sector. The UK’s latest payment model provides a stepping stone towards reversing the trend of antimicrobial R&D disinvestment. However – the aim is to see how other governments around the globe adapt a similar strategy or develop their own innovative model for incentivizing pharmaceuticals to conduct R&D for new antimicrobials. A strong leadership by WHO along with other relevant organizations, such as – World Organization for Animal Health (OIE), the Food and Agriculture Organization (FAO), UN Interagency Coordination Group is critical for successful AMR governance.

ConnectHEOR is devoted to working on this global healthcare issue. In a recently concluded assessment by NICE on AMR evaluation for ‘subscription-based’ payment model, one of our key team members worked as a modeler in the assessment team of EEPRU and provided scientific excellence. Check detailed reports. [6] [7]  Besides, ConnectHEOR team has extensive experience in working in the space of infectious disease and global health and is fully dedicated towards the mission of eradicating AMR. We aim towards working more in this area of research through effective collaborations.